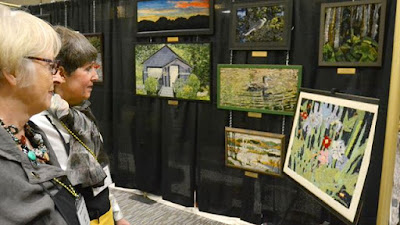 HUNTSVILLE – The room was buzzing with visitors admiring the intricate works of fibre art displayed at Deerhurst Resort on Sunday.

The Ontario Hooking Craft Guild hosted its 50th anniversary conference with 400 members representing the 60 guild branches at the Huntsville resort from April 29 to May 1. The event included an open house for the public featuring hundreds of wall hangings and rugs woven in every colour and depicting innumerable scenes based on the artists’ individual styles and designs.

Wanda Wallace, conference co-chair, said the anniversary celebration marked a milestone for the guild, while also preserving a heritage craft.

There is a significance in not losing our history,” said Wallace.

“It has a very rich Canadian history coming from the Maritimes and Quebec,” said Algera.

How does it work?

The craft starts with a design drawn on a piece of linen or burlap. A tool reminiscent of a crochet hook pushes ribbons of wool or other material through the backing, giving the design colour and texture. The works on display included landscapes, portraits, animals, mosaics, floral patterns and whimsical interpretations of the conference’s theme, Going for Gold.

Algera said the craft is seeing a resurgence as fibre arts, such as knitting, crocheting and quilting, climb in popularity.

“I think part of the reason is because the baby boomers are starting to retire and they are looking for crafts. Knitting has enjoyed a real resurgence and it’s a great opportunity for us,” she said. “Part of the mandate of the Ontario Hooking Craft Guild is to promote traditional rug hooking and keep it alive as one of our heritage crafts.”

Evolution of a craft

She noted, though, that the heritage art has seen an evolution over the years with some crafters shying away from traditional wool fibres and leaning more toward mixed media such as buttons.

“It’s evolved and the rules around rug hooking are now very relaxed,” she said.
And Wallace noted rug hooking is easy to learn.

“We have someone from Beaconsfield, Que., who had an interesting story last night. She slipped into the dollar store, bought some frames, stapled them with burlap and wrote the initials of each (student in an elementary class) on the burlap, supplied them with the hooks and wool, and in two hours they went home with a wrapped gift,” she said. “We love it when the youth are involved.”

The conference also highlighted Huntsville artist Diane Ayles, who was named one of two Rug Hooking Artists of the Year by the Hooked Rug Museum on North America in the Maritimes.

There were also vendors alongside the artists, including Jen Manuell and Sandra Stetler of Fish Eye Sisters Fibre Art and Design from the Township of Perry north of Huntsville. The sisters said they have registered as vendors for 11 upcoming outdoor shows in the next six months, a testament to the popularity of fibre arts and crafts. 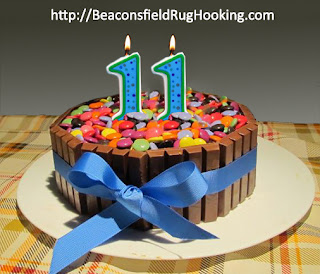 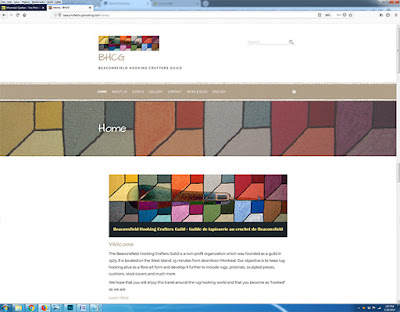 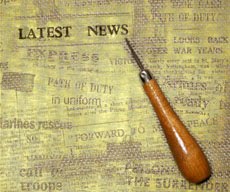